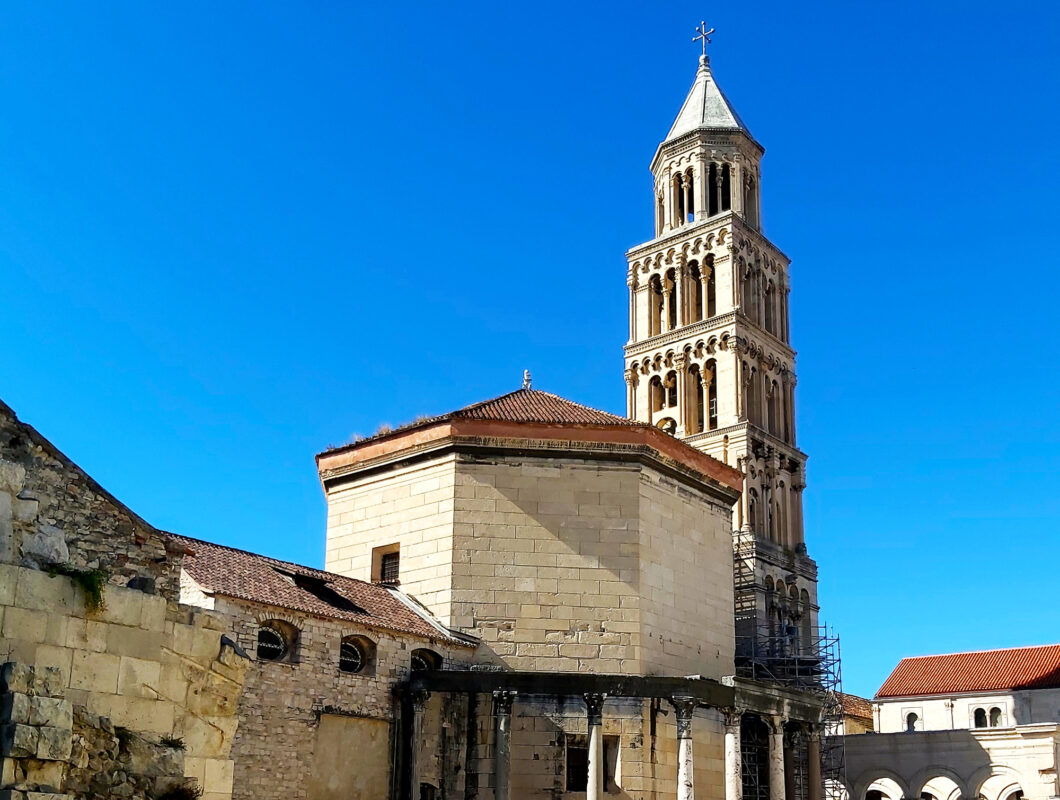 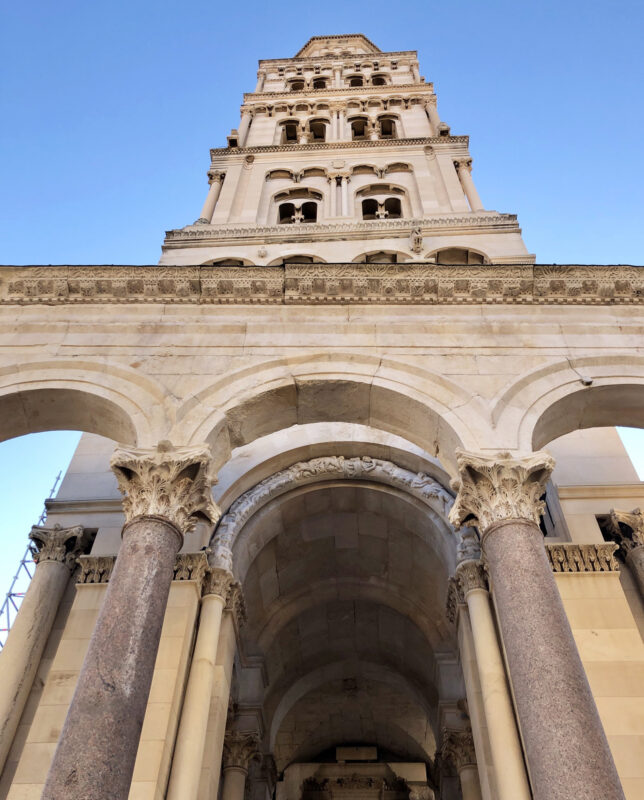 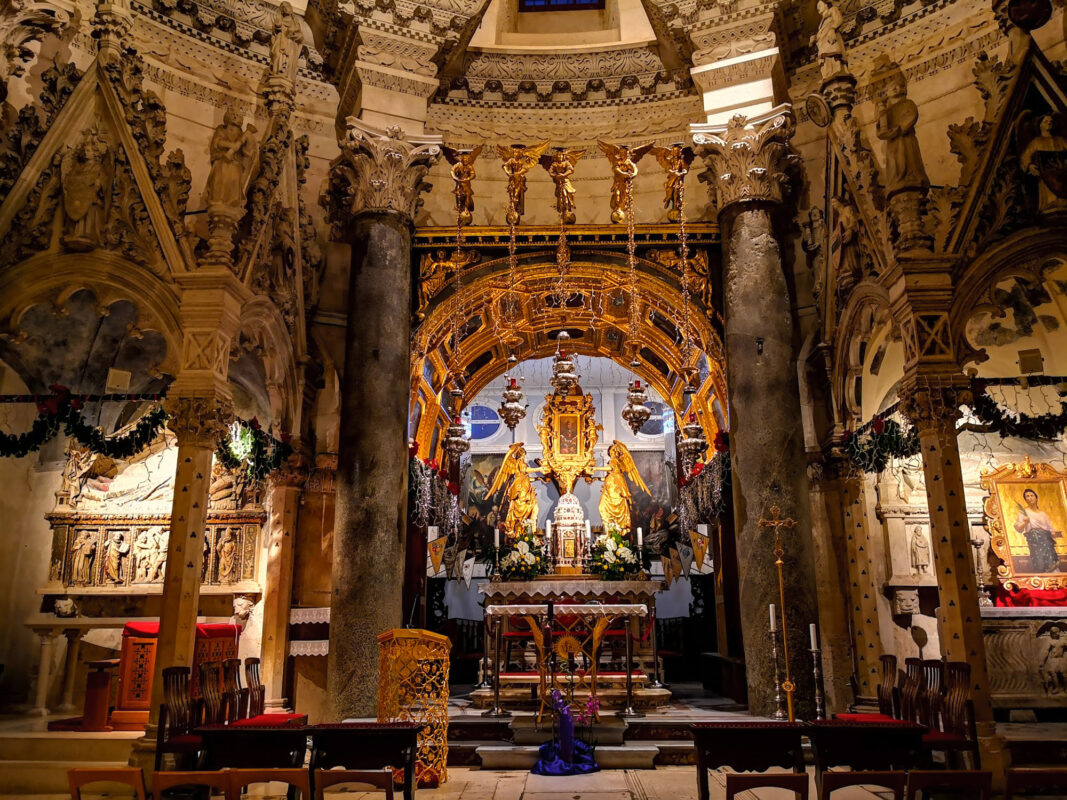 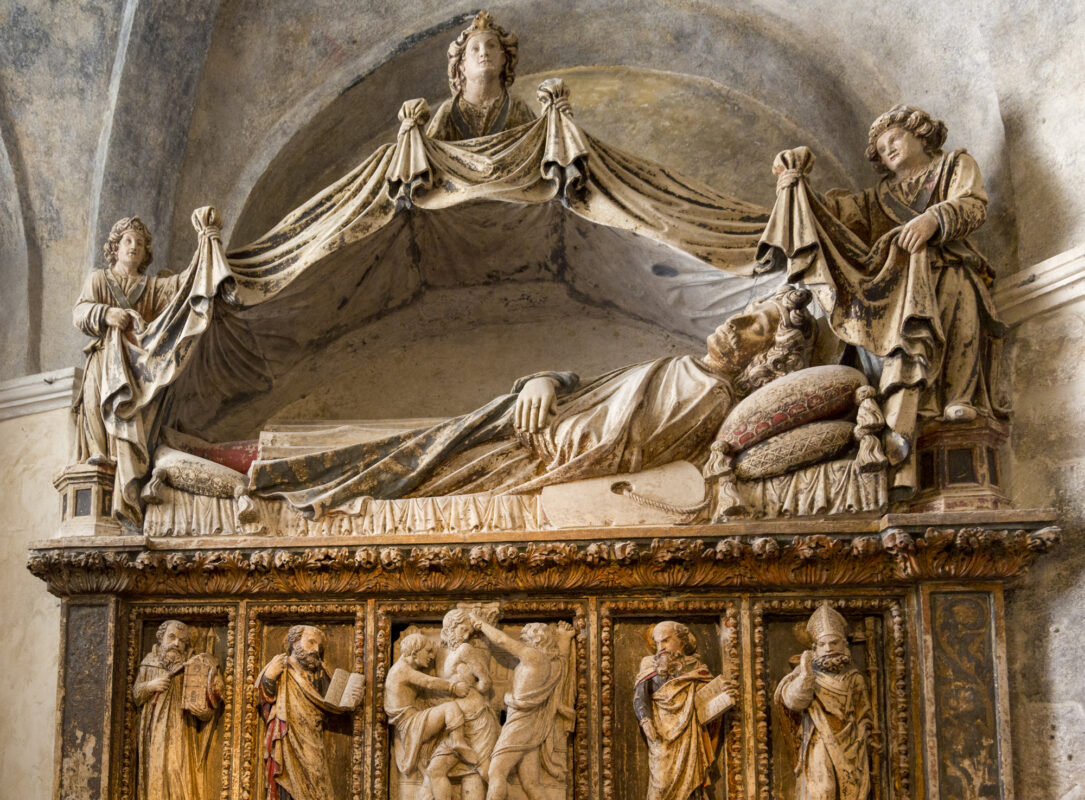 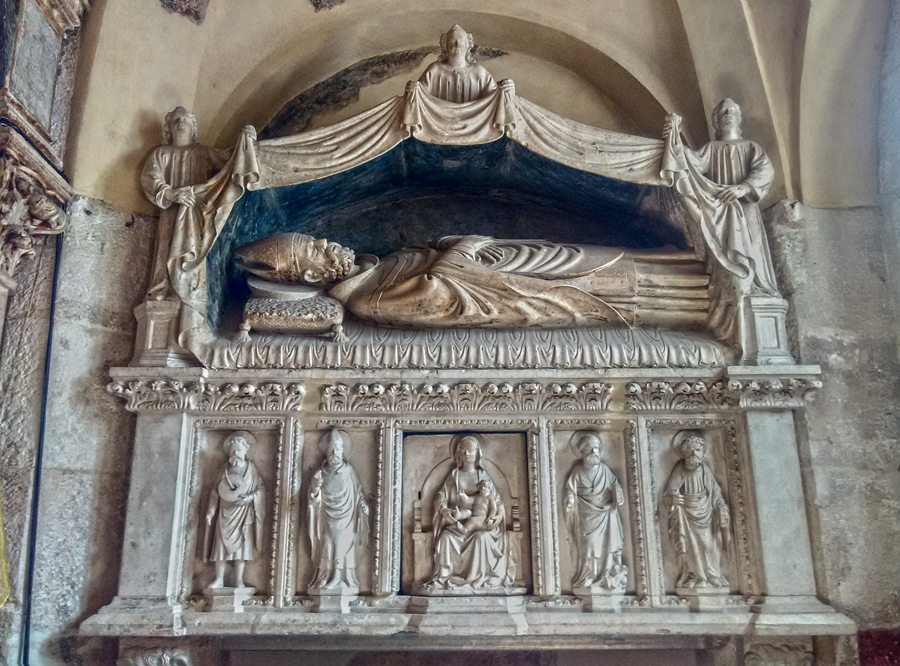 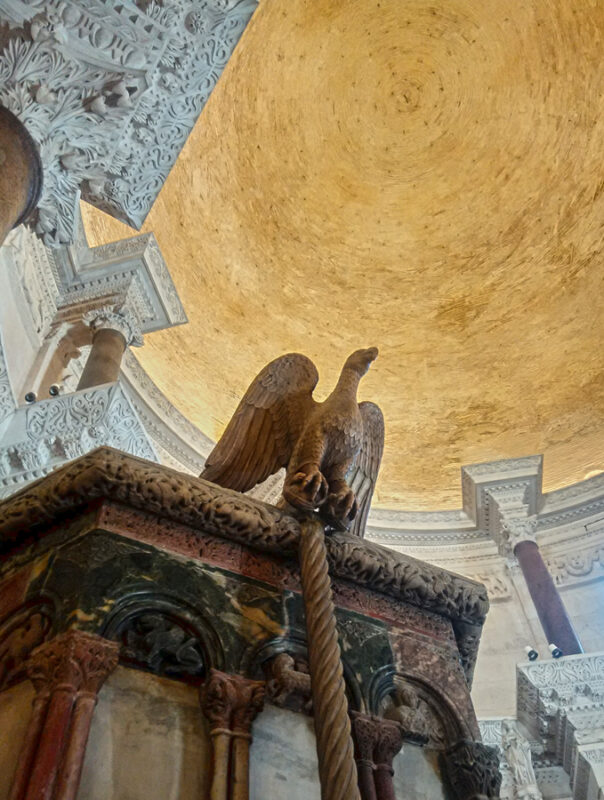 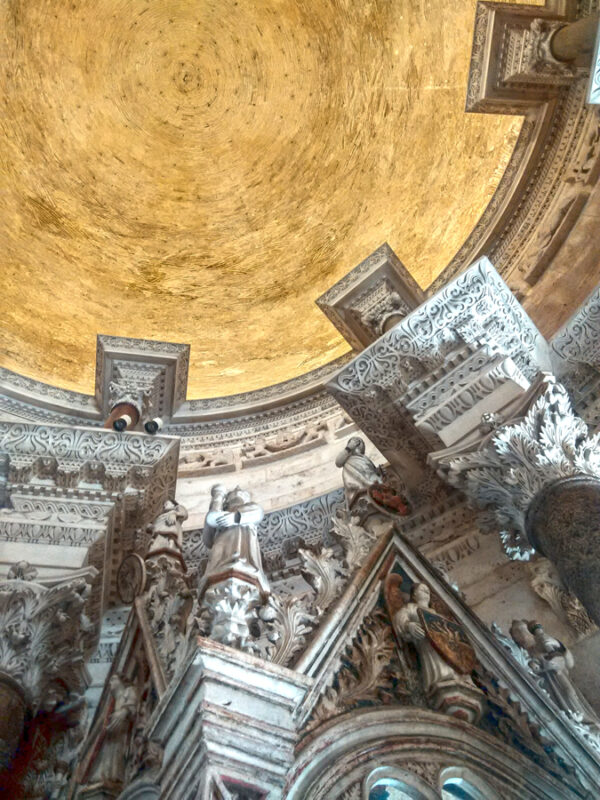 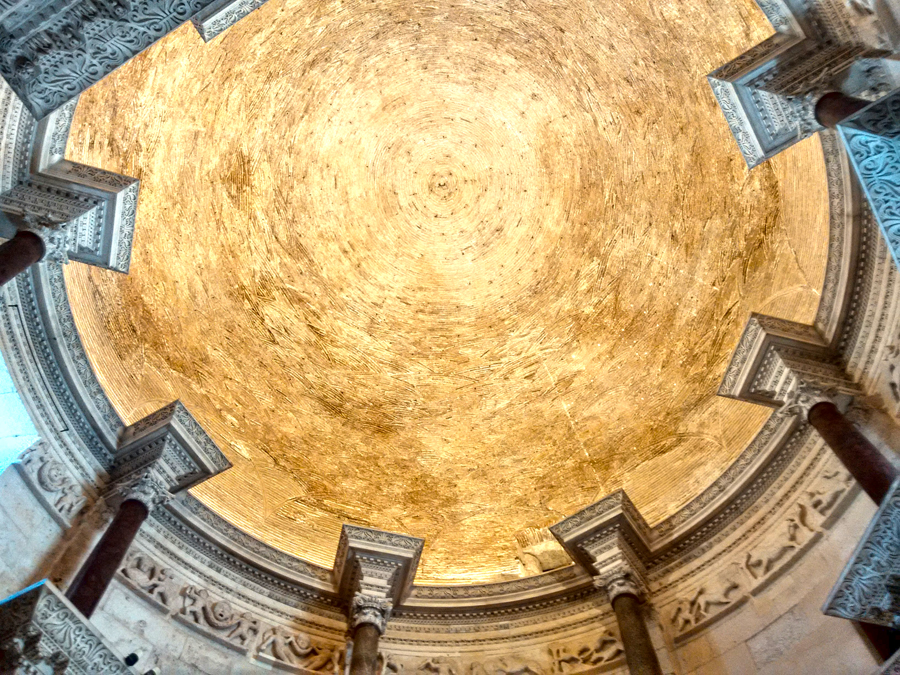 The history of the cathedral of Split goes back to the beginning of the fourth century, when the building was first built by the Roman emperor Diocletian who envisaged it as a mausoleum. In 311, following Diocletian’s death, his body is thought to have been deposited in a sarcophagus, now lost, made out of the purple-hued Egyptian porphyry, used only in the finest imperial monuments. The mausoleum and the rest of the imperial palace remained in the imperial possession up to the middle of the sixth century, when the former emperor’s remains are thought to have been removed and the building converted into a Christian church that was originally dedicated to Sts Cosmas and Damianus, following the reconquest of Dalmatia by the Byzantines under the emperor Justinian the Great.

In the eight century, following the abandonment of Salona, the former metropolitan capital of Roman Dalmatia, the former mausoleum was converted into a cathedral, when the relics of the two martyrs of the early Salonitan church, Sts Domnius and Anastasius, were brought to the blossoming town of Split from the ancient graveyard of Manastirine, just north of the old town walls of Salona. This was the final touch in the longer process of transferring the political and ecclesiastical functions of the dying ancient city of Salona to the blooming medieval town of Split which also took its role of the archbishopric.

The original layout of Diocletian’s mausoleum shows a building that has the shape of the octogon surrounded by a porch carried by twenty-four columns on the outside, while its interior kept a circular outline, that was broken up with four semicircular and four rectangular niches. Between the niches rise eight large red granite Corinthian pillars with another eight smaller ones stacked on top of them. Two cornicle circlings span the radius of the interior walls just bellow the top parts of both levels of pillars which are decorated with reliefs showing masks, human heads and the mythical erots in the hunt. In the upper cornicle circling, above the present-day main altar, two medallions decorated with highly stylized portraits are sometimes hypothesized to be sculptural depictions of Diocletian and his wife Prisca, though such an interpretation is dubious at best. On top of the second row of columns, a fabulous cupola made out of brick is thought to have been originally covered with gleaming mosaics, just like the one in the Vestibule.

Fitted within the ancient entrance of the former Diocletian’s mausoleum is a rare surviving example of Romanesque wooden doors. The doors, which are constituted of two door wings, each carved with fourteen scenes, split into two columns, making twenty-eight scenes in total, are made of walnut and are decorated with the scenes from the life of Christ, from the Annunciation to the Resurrection. Thanks to the surviving literary evidence, it is known that the Romanesque doorway was officially installed and blessed by the archbishop Bernard on the day of St George (April 23) of 1214 AD and that they were made by a local craftsman Andrija Buvina.

Inside the cathedral building, located left from the entrance, is a hexagonal pulpit from the middle of the thirteenth century made in the form of a platform raised by a set of six columns. The local tradition has kept that the pulpit was a donation from a certain Collaphisa (i.e. ‘Dove), in the name of her deceased husband John, who served as the count of Split.

A recent restoration has revealed that the monument had been created out of more than fifteen different types of ancient stone,  assumed to be scrapped off from the parts of the mausoleum and the surrounding ancient structures. The restoration also revealed that the pulpit was originally gleaming with colors, as traces of gilding as well as polychromy were detected.

To the left and to the right of the present-day main altar, are two medieval altars dedicated to the ancient Salonitan martyrs and patron saints of Split. The altar on the right, dedicated to St Domnius, is the older of the two and it was crafted by the Italian master Bonino da Milano who executed it in the Late Gothic style in 1427. The canopy of the altar was then covered with frescoes of the four evangelist, which have only been partially preserved, by Split’s most prominent medieval painter, Dujam Vučković in 1429.

The altar on the left dedicated to St Anastasius was made by Giorgio da Sebenico (Juraj Dalmatinac), the greatest Dalmatian sculptor of the period. Giorgio’s lifelike portrait of the martyr shows him asleep on top of his sarcophagus, while the front-facing side of the sarcophagus depicts the scene of the Flagellation of Christ, which is surrounded by the portraits of the four church fathers.

The main altar, executed in the Baroque style, was built from 1685 to 1689, while the second, newer altar of St Domnius rests in a late eighteenth century altar created by the Venetian sculptor Morlaiter in 1767.

In the Baroque period, the eastern part of the ancient mausoleum was expanded with an annex which served to create the apse for the choir of the cathedral, much to the chagrin of modern art historians. Elaborately carved medieval wooden choir-stalls for the cathedral clergy that are now in the Baroque annex, originally date from the first half of the thirteenth century when they were put up in front of the main altar, in the main body of the cathedral.

To the west of the original mausoleum building, a bell tower arching over the main stairway entrance to the cathedral is documented to have been built for almost three full centuries, from the thirteenth to the middle of the sixteenth century. The extended period of construction meant that the bell tower represents an unique mix of Romanesque and Gothic architecture, with the older, lower levels being characteristically bulky, while the highers levels are leaner and its windows are higher. The bell tower was thoroughly reconstructed between 1890 and 1908 which has unfortunately degraded its artistic quality as many of the sculptures and reliefs that have been decorating its walls have been removed. 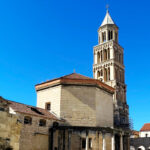 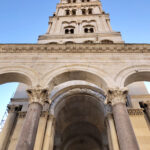 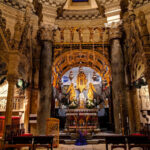 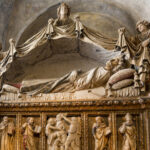 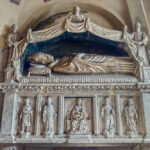 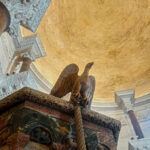 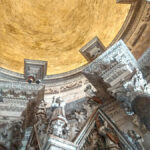 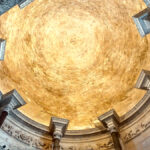