Pjaca, officially called Narodni Trg, is the largest square in the Old Town. It’s name, comparable to the Italian piazza, originates from the Latin platea, and takes on the meaning of a ‘square’. It is located just to the west of the Iron Gates (Western Gates) of the Diocletian’s Palace, which served as the main entrance to the city in the early medieval period when the Golden Gates (Northern Gates) were walled off for defensive purposes. The square is thought to have developed gradually around the former church of St Lawrence, whose remains have been discovered in the center of the square and which gave it the original name. The square must have been formed by the middle of the thirteenth century at the latest, which was the period when the so-called New City was incorporated with the area of the Diocletian’s Palace that was known as the Old City. The new square took on an important role in the municipal government, particularly after the conquest of the city by the Venetians, who had demolished the church of St Lawrence and constructed a complex of municipal buildings which included the rector’s and communal palaces. These buildings, thought to have been largely built between 1433 and 1455 have been the finest examples of the Late Gothic architecture in the city. Unfortunately, most of the Venetian complex has been demolished by the municipal government in 1821, with only the building now known as the Old City Hall as the sole survivor. Contrary to what the modern name suggest, the Old City Hall building was actually the place at which the proclamations and court judgements were read to the people. Its groundfloor houses the grand lodge (loggia), much larger than it appears today, where the official municipal measuring units were kept.   In front of the so-called Old Town Hall, a flagpole (štandarac) whose stone base was decorated with the coat of arms of the city and the relief of the lion of St Mark, the symbol of Venice, flew the flag of the Venetian Republic.

Other historical highlights at Pjaca Square include the Renaissance palace of the Karepić (Caripeo) family which dates to the sixteenth century and which leans on the Old City Hall to which it was connected by an over-street passageway. To the north of the Western Gates is a Romanesque tower-house on which a fifteenth century clock has been added. Bellow them is a Renaissance lodge that once housed the city guard and which was refurbished and enclosed in the Baroque period. To the south is the Late Romanesque palace of the noble Ciprianis family, which played an important role in the city’s political life of the thirteenth and fourteenth centuries. The facade of the palace contains the two sets of hexaphoras (six-partite windows) as well as a number of stone reliefs like the depiction of St Anthony the Abbot (1394) and the scene of Adam taking the apple from Eve. On the south side of the square, the ninteenth century hotel Central, which has recently been refurbished occupies much of the squares space. With its westernmost edge occupied by the Nakić Palace, a turn of the twentieth century building designed in the style of Viennese secession. 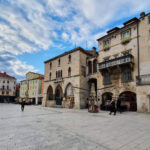