Flanked by the two rows of Corinthian colums on its lateral sides and the protyron, the magnificent entrance to the imperial quarters, on its southern side, Peristyle is the central plateau of the palace complex of the emperor Diocletian. Like the rest of the palace it was built at the turn of the fourth century. It mimicked the role of a typicial Roman forum that formed the central part of all Roman towns. In Split, however, the Peristyle played a kind of ceremonial role, as a place through which the access to the emperor’s private quarters were available. It formed a part of what historians like to call the ‘buffer zone’ between the northern part of the palace, assumed to have a practical function either as an industrial zone or as housing for the imperial household staff, and the southern part which acted as emperor’s residential palace proper. It was surrounded by the assumed mausoleum on its eastern side, which is now the Cathedral of Split, and the three smaller Roman temples on its western side, of only which the so-called Temple of Jupiter survives to the present day. 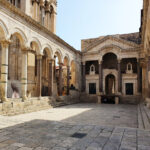