The Silver Gates are the eastern gates of the ancient palace of emperor Diocletian. Known in the Roman times as porta orientalis, the Silver Gates were completely incorporated into a thick medieval wall in the fifteenth century, as the residents of Split prepared the city for potential Ottoman siege.

In 1943, the entire area between the cathedral of St Domnius and Pazar Green Market suffered extensive damage after Allied bombers bombed the city in an effort to strike German garrison which held the town. After the war, in 1952, the medieval wall was removed and the ancient Roman gates were thoroughly reconstructed. This is why the Silver Gates are the least attractive of the four ancient gates.

Together with the reconstruction of the gates themselves, the same reconstruction effort also uncovered the original Roman-period pavement of the ancient decumanus, which connected the Eastern and Western palace gates. This is why the pavement level of the area between the Silver Gates and the cathedral is lower than the terrain of the Pazar Green Market outside of the walls: a testament to the 1700 old history of ancient Spalatum.

Next to the Silver Gates, are the so called ‘Venetian Gates’, opened back in the eighteenth century, after the threat of Ottoman invasion finally waned. 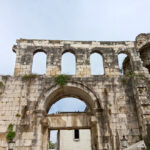