Just around the corner from the Golden Gates of Diocletian’s magnificent fourth century palace, behind an ancient stone archway which zig-zags under the late medieval palace of the once affluent Italian merchant family Meraviglia, hides one of Split’s prettiest and most authentic little two-street neighbourhood. It consists of two streets laid in a sort of T pattern: Majstora Jurja Street and Dujma Vuškovića, named after, coincidentally, two contemporaries and some of the greatest artists to have worked in the city historically. Majstor Juraj (Master George), better known in the English-speaking academic world under his italianized name Giorgio da Sebenico, was once the finest sculptor and architect in the fifteenth century Dalmatia. While Dujam Vušković, himself a native of Split and Juraj’s contemporary, is considered to be by many art historians as one of the leading painters of late Gothic period in Dalmatia, whose finest work is today kept in the Hermitage Museum in St Petersburg. 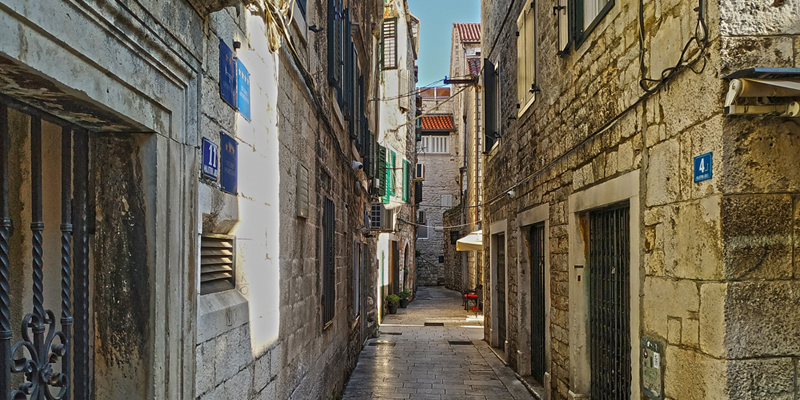 In the past, the western portion of the Majstora Jurja Street, and its other neighboring Rodrigina Street, formed the backbone of the Old Jewish Quarters or ‘Get’ (Ghetto) as it was colloquially called. It was a short-lived segregationist experiment started in the sunset of the Venetian Republic in 1778 that ended when the revolutionary Napoleonic government ordered the removal of its surrounding three gates in 1806.

There are a five cafes from the little Majstora Jurja Street neighborhood that we have included in our curated list of respectable business worth visiting during a stay in the town. Quite fascinatingly, though they all offer coffee as the basic commodity, they greatly differ in their style and atmosphere.

The most storied of the Majstora Jurja’s five is definitely Teak Café. Sprawling across the two sides of the street, it is one of the most popular small cafes in town, frequented by the local crowds during the entire year. They have a wonderful, large terrace, well-shaded in the summer months, and a simple, yet fascinating interior highlighted by the exposed stone walls of a typical Dalmatian medieval house.

A few meters away from Teak is Kala Café. Almost like a younger brother, Kala does everything Teak does, but smaller. Its little terrace is located right at the tiny crossroads of Majstora Jurja and Dujma Vuškovića Streets, so it is particularly well-suited for people watchers.

Down the road from Kala is KaKantun, a very modern coffee and gin place, born out of the ashes of the iconic Na Kantunu Café (literally, ‘On the corner’) after which it is named. Stylishly decorated and boasting with an impressive list of gins and specialty coffee, KaKantun appeals to more trendy, younger crowds.

Right next door to KaKantun is Galerija Bar, a kind of a middle-of-the-road place that appeals to most crowds. Though it enjoyed a brief stint as a restaurant, Galerija is back to its café roots. With its posh interior and a fantastic, large terrace surrounded by the high walls of Dalmatian stone houses and ancient Roman archways, Galerija is a worthy café option for everyone.

Behind the corner from the other four, located technically in Dominisova Street, is D16 Coffee. Stretching through two locations one across the other, D16 is a specialty-coffee oriented modern café. Unlike the other four, D16 has no terrace and has only indoor seating. This is why it is fairly popular with remote works, who can be found hunched over their laptops at all times of the day.

Finally, though not technically cafés, there are two honorable mentions we have to append to the list of cool places located within this tiny neighborhood. Firstly, a shout-out goes to Kinoteka Food & Bar, a stylish restaurant slash cocktail bar located in the ground floor and the courtyard of the amazing fifteenth century palace built by the Italian merchant, turned-resident, Ventura Meraviglia, whose coat of arms still decorates the entrance portal to his former home.

Last but not least, is Rodrigo Bar, a locally popular crossover between a street food restaurant and a casual bar. It is a brain-child of the Croatian celebrity chef Ivan Pažanin, a judge and a star of a popular culinary show similar to Masterchef. The bar itself is named after Danijel Rodriga (Daniel Rodriguez), a sixteenth century entrepreneur and the leader of the Jewish community who found their home in Split following their expulsion from Spain in 1492.

St Domnius Feast Day to be Celebrated on May 7

The world of tasty nature.