Skip to content
Thanks to the Tourist Board of Split, the reenactment of the Emperor Diocletian’s walk around the Old Town, accompanied by the Praetorian Guard, will take place on every Friday during the summer 2021 until September 24. The event will start at 8 PM at the Peristyle Square, where Diocletian will present himself to the onlookers by stepping out from the confines of Vestibule, the antechamber and one of the few remaining remnants of his magnificent imperial palace, to take his rightful seat on the throne nestled under the arches of the protyron. 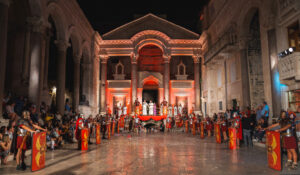 Following the ceremony of the salutation, where a throng of reenactors dressed up as Roman soldiers (though sadly dressed in the uniforms of 1st century AD) will greet the emperor before accompanying him on the processional walk through and around the Old Town. The route of the walk includes Krešimirova Street, Pjaca, Riva Promenade, Marmontova Street, King Tomislava Street and Bosanska Street and lasts approximately 45 minutes. It is set to finish back where it started, on the magnificent Peristyle Square, the most striking and historically significant remnant of the ancient Roman period in Split and beyond.
Catch the Emperor Diocletian with his imperial guard every Friday at 20:00 hours (8 PM) on Peristyle.
emperor Diocletianpraetorian guardsreenactmentroman

The Long-Awaited Introduction of Euro Expected in 2023

Home of the yummiest pancakes.