Good news for all bike riders aficionados living or visiting Split! The Nextbike company which have started their public bicycle rental system in Split back in the summer of 2019, has recently announced that their partnership with the city of Split and the local governments of the surrounding towns of Solin, Trogir, Kaštela, Podstrana, Klis, Dugopolje i Dicmo will include the expansion of their bike network that will include a total of 41 new stations and an additional 242 bicycles.

It is expected that the new system will be kick-started by summer 2022 and should finally enable riders to take their rented Nextbikes on longer trips, either to Trogir on one side, or Podstrana on the other.

Lamentably, however, the cycling infrastructure in the region remains rather undeveloped, though the city of Split has in the past years made some efforts to at least begin the work necessary on creating cycling lanes throughout the town, while the situation remains much worse in the surrounding towns where bike tracks are mostly non-existent.

Finally, the 2022 expansion of the Nextbike system will also involve a construction of several new bike stations in and around the Marjan Forest Park, the most popular recreational space in the region, whose incorporation into the Nextbike network has been postponed by petty political games. The implementation of Marjan Forest Park into the Nextbike system is expected to increase the number of riders and rides as it will enable riders to drop-off their bikes at the stations within the park, which was hitherto not possible. 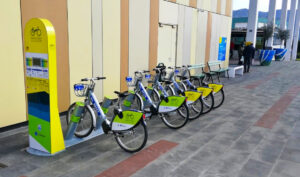 So how it all works?

Use the app to find the nearest bike station(s), find your preferred ride of choice (classic bikes come with yellow details while electric ones are painted lime green) on the app’s map, and unlock the bike by scanning the QR code behind the bike seat with your Nextbike app.

If you plan on using the bikes multiple times, Nextbike also offers a subscription based model that works either on a weekly basis (100 HRK per seven days) or on an annual basis (200 HRK per 365 days). Both subscriptions come with unlimited number of free rides for rides under 30 minutes, while rides over 30 minutes are charged according to the regular pricing (5 HRK per 30 mins for classic and 10 HRK per 30 mins for electric bikes).

Taste the Mediterranean and be amazed.